The Slight Surprise Of Action

I’m delighted with the exhibition warning about unstable works. I’ve not often been frightened by the wibbly and while possible accident reports exercise my imagination, there is a sly purposiveness and watchfulness rather than malice among Julie Henderson’s agglomerations of objects.

The large underground space is a fittingly neutral ground for these works dominant palette of pale wood, white paper, gesso, plastic tubing and grey gloss paint. There are gleams of steel, copper wire, and colour in a photograph, vivid pots of pigment, a painted figurine and a dart board. It seems like the strippings out of a shop or modernist house, pale plywood and shiny metal. All very functional and self evident. But things have been subverted here or seem to have brought themselves into constellations that question their original purpose. 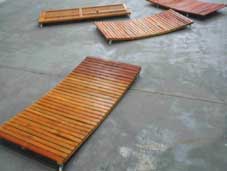 The Slight Surprise Of Action

These are materials (metal, wood, leather, gesso, wax) that suggest a Beuysian attention to the essence of things and their meanings. But they also seem in a way ersatz, copper stands in for gold, powder coating for lead, pigment for lapis. Titles too hint at other meanings, shim sham is a tap dance, Borges a trickster, others invoke the gravitas of science. Things are and are not themselves

Around this large space are conglomerations of things. An assemblage of laminate tables, perched on each other with a beeswax filled lamp, a dart board and a red painted figurine spewing out a wax shadow is ‘your warm embrace: making light fast from thin air‘ (all works 2010). Objects balance and hover, connected by wires in fragile stasis. ‘Shim sham overrider’ is a metal stair frame without treads, a stool on which glossy dead grey tap fittings are sat, wires hang a set of dumbbells in mid air as a counterweight to a plywood plank with steel handles. Balanced on a corner it pivots and describes a perfect circle in space when I gently push it as I go by. Their intention is to be set in motion and stilled they are curiously both purposive and resistant.

A long written screed on the wall (the artist talking) says ‘any alliance of forces makes a body’. Bound by the relations between these things that undoes what they might have been once and remakes them, these collections are precisely this, bodies that act in concord.

It seems too that these objects have rejected the functions assigned to them and discovered their own. A section of handrail in ‘humming bird woodwind’ is replaced by a tube of bright bronze mesh matching the form of its surrounds but see through not supportive. It speaks of its own form and the absence of what it once was while the rest of the rail clings resolutely to its solidity.

Across the middle of the gallery floor, a procession of slatted wooden platforms on castors beetle. Against another are ‘hic et’ and ‘et nunc’ (here and now) two mechanised, wheeled platforms that find their own way around the space. It’s easy and poignant to imagine them bumping their way around. We anthropomorphise so easily and with animation, this seeming independent volition they become beetles, dog like, humanlike, us. But they aren’t beetle, beetle isn’t human, they remain irreducibly things. What they are, is a complicated set of relations between things and the state of their own thingness, their self contained selfhood.

These are indeed very odd things and the insecurity that the warning refers to is deeper than wobbly platforms. George Popperwell’s ‘exit music’ at CACSA in 2008 brought vividly to mind Borge’s story Tlön, Uqbar, Orbis Tertius and his fantastically unstable objects, Hrönir. So I am delighted again to see that this piece with wax simulacra of a tree branch lined up in a suitcase is titled ‘Borges garden: the left, the kept and the taken’.

Copies of things lost spontaneously called into being by need, Hrönir are simulacra. Borges writes that every 8th or 9th generation, a Hrönir emerges that is so perfect, it calls the status of the original into doubt. Popperwell’s Hrönir unpick meanings, here they destabilise. Things tilt, pivot, sway and the status and meaning of the original is rendered distinctly wobbly.

The artist writes of the ‘estranged and strange thingness of things’. Estranged from us but not from each other, these collections of things that become working, moving bodies invoke their own irreducible objecthood and our complicated relations to the world in becoming other what they were.