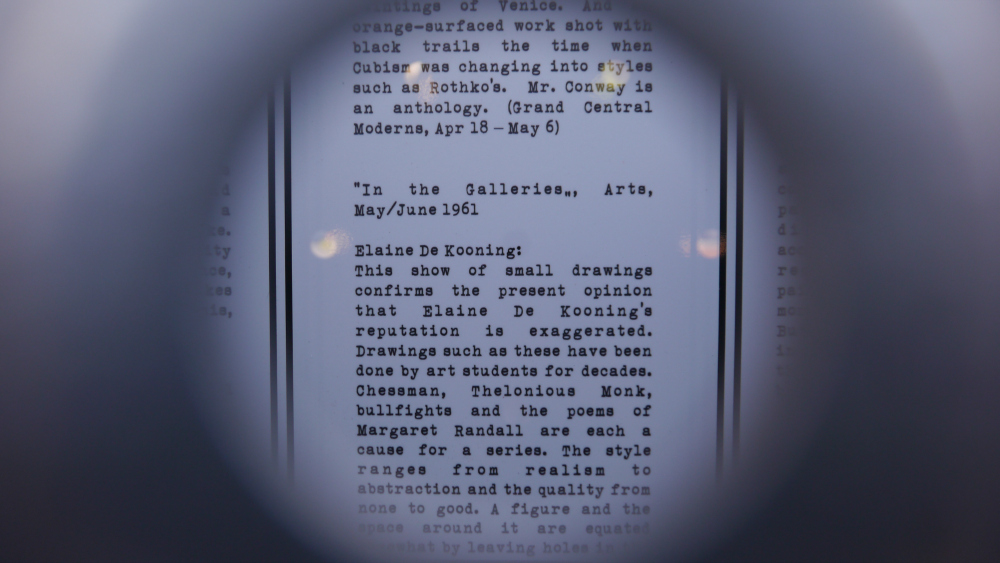 There’s an alien quality about George Popperwell’s objects, a feeling that the work has simply arrived, quietly and wholly complete.

This enigmatic quality has much to do with their sleek finishedness and self-contained air, as with their complicated constructions and arrangements that suggest equally complicated functions. They are objects of unknown narratives and composed with a refined material vocabulary that refuses the imposition of easy codes and interpretation.

Approaching Popperwell’s work is to enter a game where one is constantly subject to the classic misdirection. One that hides the sleight of hand elsewhere. There are closed off forms with no obvious entry point except sometimes, peepholes and his materials are so relentlessly ordinary (steel, plywood, Formica) that they’re slippery. Without anchoring code, the eye seems to slip off these enigmatic objects, their blank completeness both tantalising and resistant.

His work is always an exercise for the curious. Peepholes pull you in, the eye searches for something to settle on, the mind for a key to give the game away. For these are elaborately constructed games where clues abound and lead those willing to give time from clue to clue, idea to idea, composing and recomposing the work.

In this latest work, Ibidem (2012), a response to the (so familiar it’s ‘unseen’) Judd sculpture Untitled (1974-5) at the Art Gallery of South Australia; Popperwell’s sleekly constructed steel box itself flirts with invisibility, flickering between the unseen and the unmissable. Ibidem, of course means in the same place and this reference too plays with seen and unseen, the original is here (in the same place) but unseen, separated from this work by the bulk and presence of the gallery itself.

This closed steel sectioned box on complicated supports looms both insectoid and industrial. It’s all trusses and hugely over engineered suggesting some immense significance or purpose. Hard up against the Art Galley steps it’s unavoidable and initially uncommunicative.

The forms are familiar to a seasoned Popperwell observer. The triangular supports resemble a sawtooth roof, (an ominous form in his work), the peepholes along the side (the only break in its industrial surface) have been seen before and its apparently blank face is a standard opening gambit in the Popperwellian game of deflection and delay.

Peepholes travel at different heights along the box’s length inviting inspection but only affording a fractured view. The interior is fragmented further by clear Perspex sheets printed with construction diagrams for an unexplained object that hang between the viewer and more sheets printed with text that run centrally down the box’s length. The effect of this plethora of detail is layered and richly confounding. 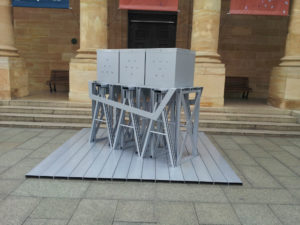 But here then perhaps is the first clue for in these texts is Donald Judd. In his writings and interviews, arguing for art, on his art, on the lack of unionisation of artists, on the 1972 McGovern presidential campaign[i], there are local reactions to the exhibition some Recent American Art[ii] and to installation of Judd’s work Untitled here at the Art Gallery in 1974-5[iii].

This mass of text and information is forcefully animated by the voice and the sheer multiplicity of ideas and positions taken. As the box forces one to look and read piecemeal, the impulse is to move around it to construct a unitary whole from these glimpse and fragments, an urge that the work resists steadfastly.

For this box is a complicated game of seeing and not seeing, of occlusion and revelation. This box of fragments powerfully invokes the Judd work without ever showing it. Judd’s voice, ideas, the work itself ‘untitled’ (the diagrams are in fact its schematics); are there. There are pieces, intimations and allusions and the central thing, the referent is there, but sight unseen.

The Judd work looms at the centre of Popperwell’s box as an idea and a potent thing made of words. Sight unseen, you couldn’t say what the Judd should look like but you would have a powerful idea of what it should be like.

In Ibidem Popperwell simultaneously tantalises sight through this wordy conjuring of a thing and denies it. This flickering game of seeing and not seeing is a variant of Popperwell’s standard games of deflection and delay, sight is offered and deflected so that the viewer must work harder, must do with what one is given by denying the easy ‘out’ of seeing.

It is a game where meaning and closure is almost infinitely deflected in favour of production so that the work can be experienced as a field of sensation and possibility. The work must be composed and recomposed infinitely by the viewer in that place and time.

And these games of deflection and delay are a key to the other processes in operation. Here inside Popperwell’s box, is Judd arguing for the artists right to be obscure. To paraphrase, that in making art what can seem wilfully obscure or difficult is, for the artist absolute necessity. And this is where Popperwell draws his wagon alongside Judd’s as his work steadfastly asserts the absolute necessity of its own difficulty.

Popperwell deploys his forms, materials and codes in an endlessly self-referential game that continually reasserts its own absolute necessity of form, time and place. Every work is an assertion of its own necessary ‘thisness’. In Ibidem, he deploys this difficulty as a tactic invoking and linking his work to Judd’s, establishing the absolute necessity of his own and reclaiming this for the Judd piece.

With this potent invocation held in mind, revisiting the original referent Judd’s Untitled (1974-5) becomes an exercise in renewed possibility. In that awkward triangulation at the Gallery’s back it seems only a simple, minimalist concrete triangle whose primary function is now as children’s climbing frame. Yet it is the field of possibility opened up by the juncture of Popperwell’s work and this unexpected use that its original intent and potency can be experienced.

As children edge delicately along its top the subtlety of its planed and angled surfaces are apparent. The point where angles meet impossibly and balance inevitably fails becomes a punctum of surprise and a revelation of the form’s dynamism. That children climb up always at the lowest point reveals how it isn’t a uniform height as it first looks but shapes to the lands incline recasting both form and site as part of a larger topography and history. How the central void remains largely inviolate and how climbers approach the form from below so that it is seen and surveyed all at once show how it should be seen.

As every action lives out the complex subtleties of the form and primed by Popperwell’s simple refusal to show, the primacy of sight is undone and the Judd reinstated as a site of possibility, experience and sensation rather than an object for the eye to skim over.

Sight unseen this game plays out, an assertion of the necessary difficulty of art and its rewards.

[i] A campaign from which Obama’s people pinched many ideas. For a fascinating account of the campaign and why American politics isn’t really democracy see Hunter S Thompson’s ‘Fear and Loathing on the Campaign Trail’

[ii] The general reaction to this exhibition of new and groundbreaking work seems to have been righteous outrage.