An exhibition reveals the bones of the museum 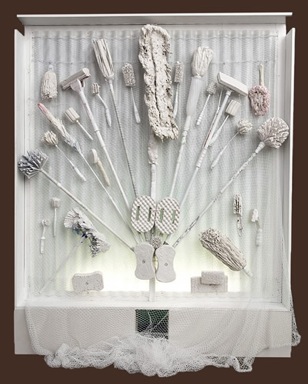 Do not adjust your set, it’s only how you look at it. A sculptor turns the museum in on itself for another look.

So familiar are we with the conventions of the museum that we treat as if it its truths are self evident , forgetting that even if the medium isn’t the message then the medium constructs the message. The disregarded bones of the museum are the techniques and forms of display, those invisible wires that weave all the variety of the museum into seemingly complete narratives about the world. We see these stories as seamless images through the transparent window of the museum, what we don’t see are the wires and sets.

Niki Sperou’s new work for Inside SAM’s Place is a disruption to the smooth surfaces of the Museum display, a quiet bomb embedded in the South Australian Museum that nudges the viewer into other ways of looking as it reveals the mechanics that hold it all together. Sperou’s work is intimately concerned with the orders of things, the hierarchies of naming and value that organise and make understandable the world. Nowhere are these systems more fundamental than in the museum and in this incursion it is these stage mechanisms, the techniques and forms of display that concern her. Earlier works of hers include chimeras that seem to be museum exhibits dropped in from a parallel universe and it is this sly sensibility and somewhat oblique approach that is evident in Ethnographica, a sculptural work that cleverly undoes the Museum’s underpinnings piece by piece revealing itself to be more artfully disruptive than it first appears.

Ethnographica is the first part for 2007 of ‘Inside SAM’s Place’, a collaborative project by Craft South and the South Australian Museum that connects visual artists and the museum. The artist’s final work, exhibited in situ, grows out of their response to their investigations of the museum’s collections and archives.

Niki Sperou has placed Ethnographica in the Pacific Cultures Gallery, firmly locating it as a direct response to this discrete collection and claiming the same status for this work and its claims. Her gallimaufry of cleaning implements (mops, dusters, blind cleaners, sponges on stalks etc) has been arranged into a large, complex, fanlike assemblage an almost exact correlate of the careful displays of Melanesian clubs and spears immured in the wall cabinets.

These everyday things have been coated sloppily, incompletely with raw plaster of Paris leaving filaments and plastic handles exposed, a deliberately ‘trashy’ effect, the artist writes. This trashiness is part of the profound effect this simple act has on these things, bringing both immediacy and liveliness to the work, dislocating them from their original function and transforming them. Made newly alien they become artefacts, equivalent to the exhibits they mirror and every other object in the Museum.

This sleight of hand movement from ordinary object to artefact creates a tangible connection between the two orders of things, a dialogue occurs through which we’re able to begin to look beyond the object to the mechanics of meaning that underlie it.

The seeming carelessness of the work, that it feels a bit like it was knocked up in an afternoon shows an irreverence that undermines the portentousness/solemnity of the museum and asks how value is given to things in the museum (why are sponges on stalks now important exhibits when not before?) and brings into question all the museum’s claims to authority and completeness, to show us the world how it really is.

Initially the domesticity of these objects—besides the ceremonial, warlike and serious—seems only whimsical, but there is another purpose here. Looking again, mops and dusters they may seem, but through this neat cooption of a display form that makes them artefacts, they seem to become something else. Persuaded by our habit of reading form as meaning and the resonances between the forms of the mops and the spears, a peculiar notion emerges of a secret warlike life for these humble things. It’s an odd experience, as if I see mops and dusters and am compelled to ‘see’ them as spears and clubs simply because of how they are displayed. The medium does become the message it seems.

Using this absurdity, Ethnographica divorces the object from the means of display and elegantly reveals the force of these techniques in shaping the stories that the museum tells, our ways of looking and the meanings that we take from this process. In the collapse of our whimsy of warlike mops, alternative ways of looking and seeing become possible. As it all comes undone, we begin to see how it is put together, to change how we look at it and to re-examine the familiar with a newly attentive eye. While Ethnographica feels like an immediate gut response to the collection it contains and is vivified by a mischievous sensibility and sophisticated understanding of the mechanics of meaning in the museum, without which it would not have succeeded so well. It both dares and defies the viewer to pass it by or to engage it on its own terms, to look behind and beyond to the bones of the thing.

As my nephew says ‘have a girl look’, meaning to look with unusual care and attention, a phrase that pithily expresses the value and economy of looking. Niki Sperou’s work is definitely worthy of a good, long girl look.

Jemima Kemp is a freelance writer based in Adelaide who is interested in craft and the intersection of craft and visual art.