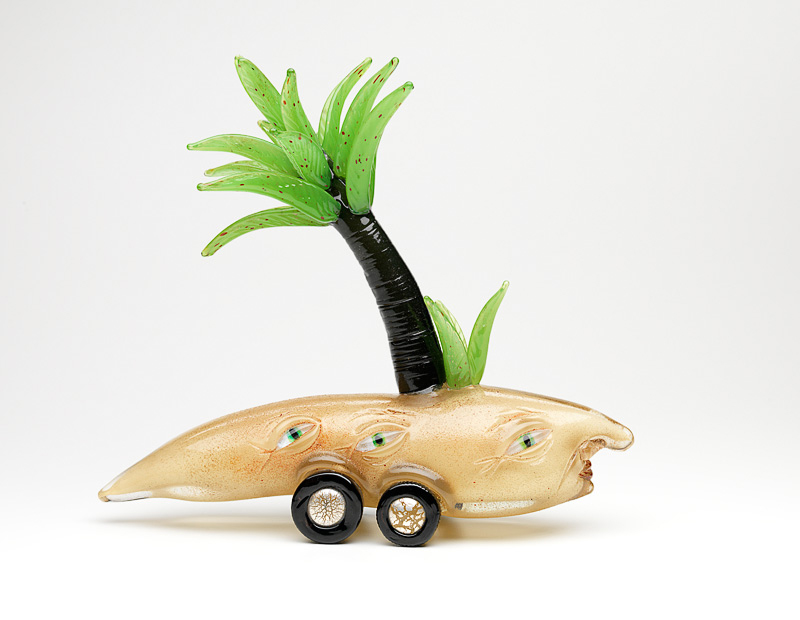 Roald Dahl, that inventor of wondrous creatures, of whangdoodles, snozzwangers and hornswogglers, would have understood Tom Moore’s world perfectly. Not only for its fantastical conglomerate creatures but for the creation of a universe rich, entire and full to overflowing. 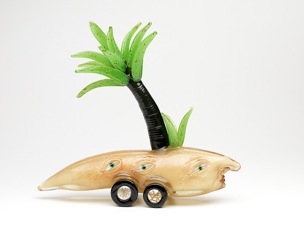 Moore’s gloriously appealing glass creatures (animal, mineral, vegetable or all three?) populate a riotous world propelled by an almost uncontainable vegetal energy as irrepressible as an uncurling potato shoot. His potatofishcars, four legged and two headed fathead birds (with shiny black boots), gherkin boys and many eyed dolefully sprouting man-islands go about their bus(y)ness in a world equipped with stories, systems, grammar and forms entirely its own.

This riotous world has rushed in and transformed the Jam Factory. A normally neutral wall is painted bright, otherworldly blue and lashed across with temptingly hung glass rain drops. Across this brilliant blue page tumble and fall lusciously coloured stripy birds, a flying kipfler like an aeronautical squid with bright, sharp leaves for wings who wisely regards us below with its five eyes. Kidney shaped lagoons are rich with teeming life of the Gulliver’s Travels and ‘here there be monsters’ kind; fat lipped candy striped fish heads, a giant duck bum sprouting branches not legs and a duck boat ferrying a trusting tatie toward one of those verdant man-islands are all bursting with life and constantly in motion. It has the sense of dioramas, of the displays of exotica brought back for the Crystal Palace Great Exhibition, worlds beyond knowledge brought into sight and touch. 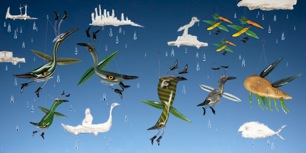 On another wall, a series of stepped shelves like one of those instructive diagrams of ocean levels displays a sprouting potato island (more boots), a surging aquatic potato car and a benign carrot nosed man, all forging their way up to the light.

For it seems that these folk are not just on the way to somewhere but on the way to becoming something else for these are forms constantly in flux in a universe equally interlinked and dynamic. And this transformative energy inheres in the material itself, the wonderfully mutable and alchemical nature of glass, where forms fuse and meld together and light is held within each form and bounces off lustrous surfaces. As glass flows through its forms, like water, like rain, so do Moore’s folk transform and evolve.

Where the carnivalesque is the real world turned upside down, Moore’s is a world exploding with leafy growth but also one of connection and enclosure, of enclosed forms and systems not linear rationality and logic. It looks kinda familiar but at core it isn’t. 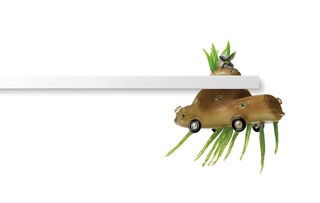 Things don’t evolve by subtraction here, they add on. As if on their way to becoming the next form, they simply pull in any and everything of use in an ingenious approach to recycling. Hence the tadpole camper (half amphibian, half van), the fatguts wheeled birdcar and the green man in his serendipitous bird shaped diving bell.

As these marvellous creatures add on and accumulate so do references and associations multiply from the rich traditions of the fantastic, mythical and grotesque that Moore’s work springs from. Spudboy, half potato, half Venetian courtier with his five legs atop a purple pear, one arm jauntily cocked and eyes and sprouts bursting out from his body recalls both Arcimboldo’s famous 16th century vegetable man and the far older Celtic Green Man. Mediaeval bestiaries and aviariums through Bosch’s more sinister hybrids to Lear and Seuss and Quentin Blake’s inimitable realisations of Dahl’s fertile brain all feed into Moore’s burgeoning world.

Like the smiling Manticores and docile Camel Leopards of Genser’s Historiaes Animalium these beings have the feel of something half glimpsed, rumoured, as if drawn from second hand accounts like Durer’s mournful Rhinoceros. Whispers of creatures that might be, could be, should be. Less ferocious and certainly more tuberous than their predecessors, they share with manticores and their ilk, this drive towards knowledge.

David Malouf writes of this “yearning toward form”, of a longing to see ourselves in our final shape. Perhaps this is partially what drives these folk on, a reaching towards and living out the forms that we need to be in. 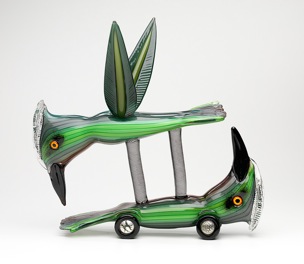 And this is where Tom Moore’s work begins to show us something else, not a simple environmental homily but the suggestion of a more profound paradigm shift. In their carnivalesque disruption of the world, all this tumbling, proliferative energy, the melding together of forms across man/car/animal/vegetable and their fusing together in glass bursts the boundaries and classifications of scientific rationality and suggests that the relations between things are closer and the divisions fuzzier than we might think. The absolute multiplicity and variety of forms echoes our world’s rich bio diversity. These folks gentle cooperation suggests the delicate interdependence of ecosystems and all living things and removes humanity as the centre of all value. For there are few humans and it seems to me that here humanity has simply been outclassed, out evolved and all that remains is for rampant (but good natured) fatbirds and leafy magpies to clean up the mess of cars and cities that we’ve left.

It’s a worldview close to that of deep ecology and its ecocentric philosophy that values nature for itself not its uses to us. The wholistic interconnectedness of Moore’s work is exemplified in the indivisibility between his life and practice seen here in the documentary that forms a soundtrack to this exuberantly tumbling menagerie. Here, evidence that this abundance has finally overflowed, as flashing past us is Wolf Boy, zipping through the streets of Adelaide on the hunt and look out, an emissary and messenger for this bright green world. 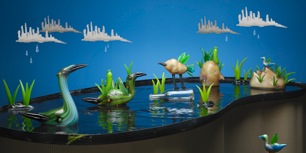 All images © The Artist
Courtesy The Jam Factory