A candy striped fish pokes its head up, all lipstick-pink kissable lips as a voyaging duck sprouts tree-masts and becomes duck-ship-island captained by a lone gherkin boy. Delinquent birds rampage while a crested birdcar peacefully unfurls sweet green shoots. A cardboard city burns and there’s something odd lurking in the pond, metallic and tuberous, it regards it all with a wary eye. 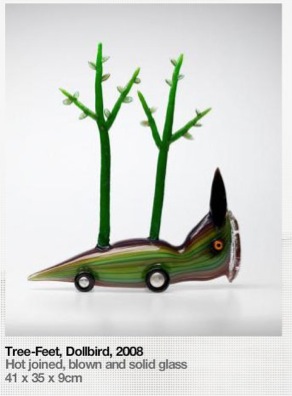 There’s a whole world at play here. Growing, flying and always moving, this isn’t ours turned upside down but something other, a unique universe bound together with a logic entirely its own. Tubers take to the air, birds grow wheels and everything overflows with energy, pushing out green tendrils toward each other.

Tom Moore’s gloriously appealing glass creatures spring from his own fantastical imagination and the rich seabeds of the mythical, imaginary and grotesque. From mediaeval bestiaries with their camel leopards and manticores, to misericord creatures through Lear and Seuss to Moore’s reimagining of an Colonial Australian epergne as a verdantly plumed robot bird with resplendent palm tree, his creatures reuse, recycle and recombine in their never ending metamorphoses. 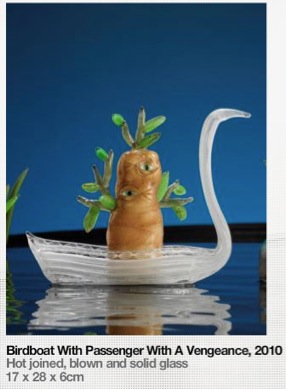 There’s an irrepressible joyousness in these creatures constant flux as they burst the boundaries of animal/vegetable/mineral and do away with taxonomies and rationality, reinventing themselves in happy disregard of all humanity’s rules.

While lurking seems antithetical to all this busy-ness, to skylarking fatbirds and peripatetic potatoes, the will to knowledge at the core of all lurking is what propels this endless becoming. This insatiable urge to simply find out is the engine of this prolific universe. As duck becomes island and man becomes bird, Moore’s creatures ask an eternal ‘what if?’ and an insouciant ‘why not?’ 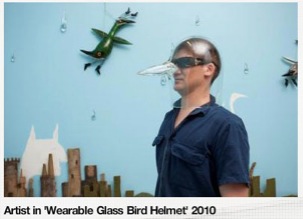 This transformative energy inheres in the material itself, in the mutable and alchemical nature of glass, in the fusing and melding of forms, as light is captured within and bounces off lustrous surfaces. As glass flows through its changeable states, like water, like rain, so do Moore’s folk transform and evolve.

It’s this continuous moving through forms that hints at other meanings. Sharing forms, being made, as it were of each other and sharing an essential nature, each creature reaches out to every other in a net of relations in an intricately connected universe. These deep bonds, seen in their loving regard for each other speak of the delicate structures and balance of ecosystems and an absolutely necessary attention to and care for the world. 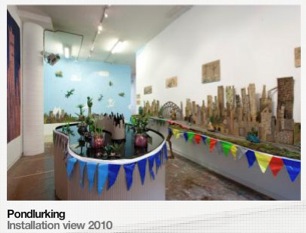 For there are no humans here and it seems that it’s this carelessness, this lack of attention to the fragile connections between the world and its creatures that’s the reason. The cities burn and cars rightfully become compost.

This riotous parade has pulled the artist too into their exuberant tumble. Becoming man-bird and greeting the day with a drumming bird song he is the harbinger perhaps, of a new order, one bright green and sparkling.