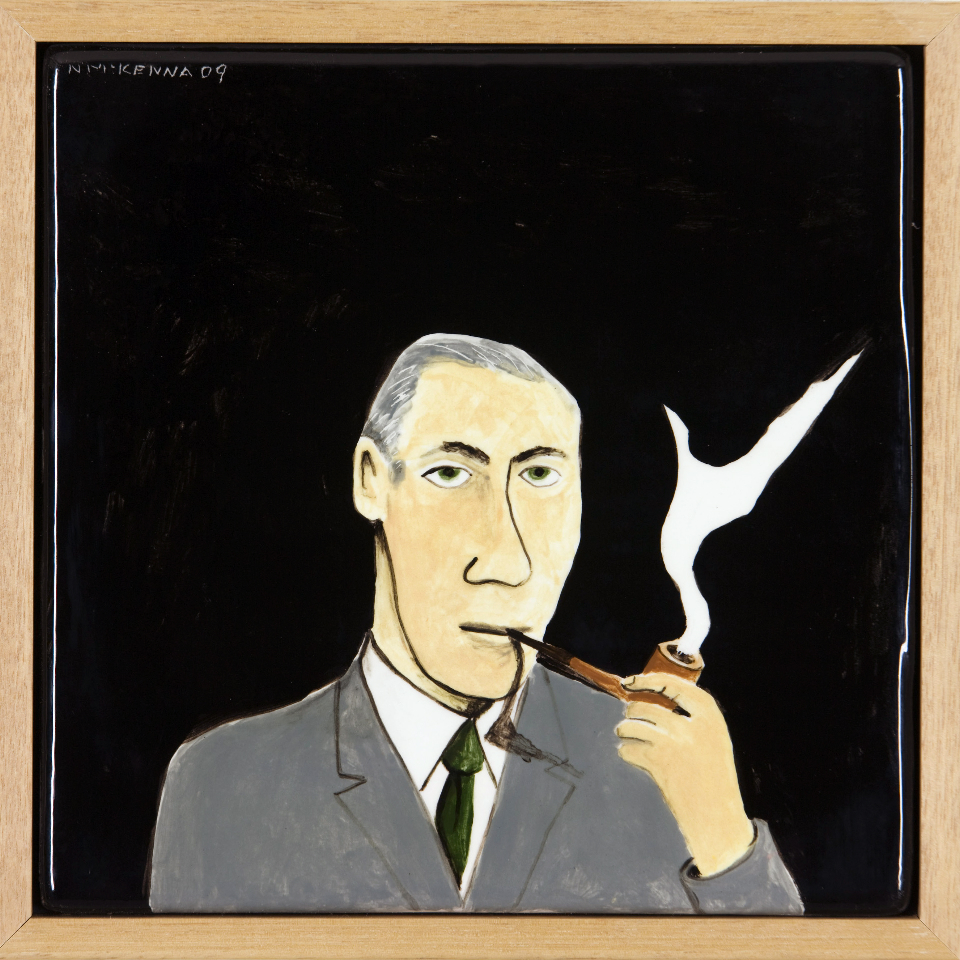 Big was well, quite big actually, commodious, capacious and slightly chaotic. A kind of suitcase compendium of a show it had the feel of being put together quickly and vanishing by night. The largest foray yet for local collectives 2% and Format (who kicked in solidly alongside with a zine show and workshops), Big not only showed off the work of more than 30 artists; it brought together an entire undercurrent of local scenes and creative makers. It was cold, the venue cavernous, the crowd stylin’ and there were haircuts I hadn’t seen since 1987 gleefully resurrected. The appropriated and put together stylings of the attendees reflecting a certain fluidity of form and intention also present in the works. Specifically, that debated delineations between art, advertising, commercial and fine art work, simply don’t seem to exist for many of the artists here, with work presented without these imposed definitions rather as a freewheeling, egalitarian show and tell. 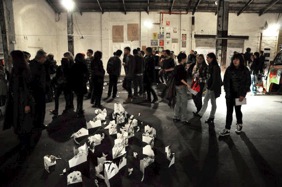 The central hall contained what seemed to be an installation of kombi van, signpost and mountain range that was in fact three separate pieces working beautifully together in a paean to travel in differing scales. The Naysayers Kombi Van Project (with real van) travelled towards Louise Vodic’s evocative and delicatePocket Mountain, a printed and cut out fold up mountain range, with light snowfall of glitter on certain peaks, as Jessie Lumb’s official looking signpost pointed the true path to San Diego. Actual mobility was later supplied by the Hoon Haiku Project, a rudimentary corrugated cardboard and texta inscribed van. A mobile poetry project of Lou Smith and Arlene Texta Queen, the Hoon Haiku van roamed about carried by its occupants who engaged in some random shouting (and I think poetry) generally more inventive than the usual Hindley street variety. Nearby, Anna Horne’s wood grain vinyl box showed an exploded side as if something nasty had just burst out and gone a-wandering, a similarly busted out hole sat on the floor suggesting a lurking uncertainty below these smooth artificial surfaces.

Laura Haigh’s paper balloon forms clustered in a corner like bacilli and spread out finding themselves ledges and corners to quietly colonise, a breath held in each one. Nick Moran’s oversized finches, collaged from wallpapers and card have a substantial and appealing presence and Joshua Searson’s pop arty photomontage prints recall most things from Rauschenberg to Heartfield but have a clean sensibility of their own. There were many video works and short films (showing not only that the kids are alright, they’re in their rooms playing with the telly) but these, unfortunately weren’t well served by the competition from surrounding works and ambient noise. Mark Neihus’ simple theatrical presentation of his poem 20-01-07, with a portable Olympia typewriter set on a spot lit wooden desk, had the poem scrolling out of the typewriter in a long, long sheet towards the ceiling where it was caught and suspended, setting up a small isolated space to come into the work of the poem, itself a near frantic, shuddering vociferation.

]Big’s energy was infectious and the mutliplictous array of work engaging but a closer attention to housekeeping details such as didactic panels would do credit to those showing, as the lack of panels on some works and that the works pictured in the program were often not those on show meant that sometimes I didn’t know whose work I was seeing. In a show this size, a map too, however rudimentary would have been useful. 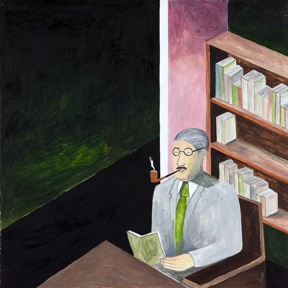 From the milling activity of Big, Noel McKenna’s show at Greenaway is altogether quieter. The subject taken McKenna says, from the results of his Googling of “men with pipes” this series shows exactly that, men and women, usually solitary and very often bearded, smoking pipes. Thinly painted in oil on ply in McKenna’s sketchy, graphic naïve style, these pipe smokers show an introspective dedication to this unfashionable art and appear completely self sufficient and not discomposed by the public gaze or disapproval of this activity. Many of the titles are directly taken from Internet sites dedicated to pipe smoking men; “I wouldn’t kick him out of bed for dropping ash” and “Pipes smell nice but I wonder how long it will take to get the mouth cancer”. Interspersed with these smokers are scenes of men fishing in the kinds of locales that suggest 1950’s American cigarette advertising (or Rock Hudson and Jane Wyman movies) with autumnal trees and lakes and other paintings of boxy, ugly sheds. 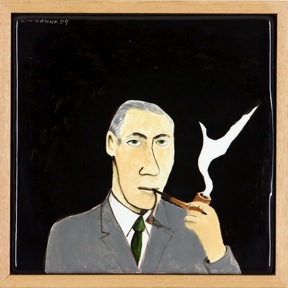 The smoking figures wear suits or with a casual beatnik style strongly recall all the suavity and claimed authority lodged in advertising images of that time. This trio of smoking, sheds and fishing suggests the vestigial persistence of those models of masculinity, of particular modes of manliness and McKenna’s use of ceramic tiles and plates for some of these images may have here an almost commemorative function. 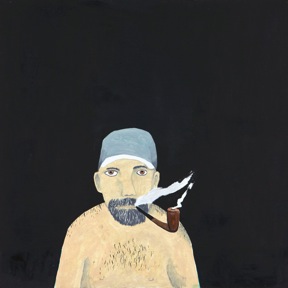 There are dimensions of Hopper as well but without Hopper’s unbidden aloneness, these figures are solitary by choice and where coupled, it’s two men, the smoke of their pipes meeting in a brotherly but manly embrace. In the painting of these figures singly as head and shoulders on a plain background there are echoes of Nolan’s Soldier series and those particular, scarifying ways of being a man. The business of being a man is here sketched out in the simplest terms but in an oddly endearing manner, a simple performance played out by actors conscious of but deeply engaged in the play.