EXIT MUSIC: A LAKE AND A STAND OF TREES

Coded resistance in the horror of the everyday 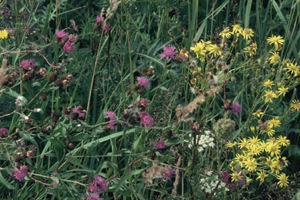 In Borge’s story, the author finding an encyclopaedia of unknown origin discovers an entry on Tlön, a country that he does not know but accepts on the encyclopedia’s authority. Tlön is a country where knowledge, language and time are all conceived differently, so that the fabric of Tlön itself operates outside of what we would call reality but the Encyclopaedia reports blandly as fact. Our narrator writes; “For the people of Tlön, the world is not an amalgam of objects in space, it is a heterogenous series of independent acts, the world is successive, temporal but not spatial.” Perhaps we are in Tlön rather than Oz.

There is a collection of book like, ledger like forms on a set of shelves, 7 shelves with 7 groups of these blank forms with 7 colours in each grouping, a table holds 7 plywood houses, anthropomorphic with curved mouths and photographs of a forest behind their slit eyes, what looks like a measuring tool hangs on the wall, made of a wipe clean laminate.

There is a system operating here, a particular complex code. I fall to counting things, if there is base number it is 3, 4 or 7; 7 shelves, houses, 4 pictures of wildflowers, images taken on the 7th of July 2007. The objects are new, freshly made, not genuine. There is a sense that these are objects standing in for something else, as if they don’t mean in themselves but replace something absent. It is this that connects to the oddest of Tlön’s artefacts, the Hrönir, objects that are spontaneously generated, called into being by need to replace lost things. Popperwell’s objects are Hrönir, perfect simulacra that interrogate and illuminate the past.

Coded resistance gives way suddenly as Buna III M, a wall work that seems to be an abstract pattern of small slabs of black rubber glued to the wall resolves itself into streets and buildings. It is a camp, Monowitz (or Auschwitz III) where slave labourers manufactured synthetic rubber (Buna) for IG Farben, the company who patented Zyklon B.

Time slows as each piece is unravelled, the houses, Bespoke Shelters are revealed as the gaping maw of the Auschwitz rail head death gate; I recall that the Nazi’s code for camp inmates was 7 colours. The colours, book forms and arrangement of the shelves are the embodiment of the bureaucratic organisation of extermination in Ledger, the European town photographed in Oswiecim Late July 2007 is of course Oswiecim or Auschwitz in its current unsinister incarnation.

Into the middle of all this, Popperwell placesGhost for Blinky. An acolyte of Beuys and German, he named himself after an American gangster and died young. Palermo’s objects and paintings concern relations between things.

I look through an amorphous hole into a room and am met by an air conditioned wind, within are arranged geometric canvases, a table, an easel with a photograph, all in a state of fine balance. Where Duchamp’s EtantDonne deconstructed the painting, Ghost for Blinky reconstructs the artist with its net of relations built around the absent centre. Two canvases record a conversation, Blinky asks Imi why she thinks there are more mice than elephants; “there are always more little things than big things”.

Little things to stave off the dark perhaps as the drifting music (Orff’s Schulwerk) pulls me through to the last room and exit music: a lake and a stand of trees. Between high fresh plywood walls pierced with peepholes is a walkway complete with guardrail. Through a peephole on one side a projection of a peaceful, dappled Birch forest and the other a small lake, occasionally moving, reeds rippling. This is all; the music, the trees and the lake, gentle and ordinary.

It is unclear if these are the places; if the lake is full of ashes or the forest a massacre site. They are, they aren’t, it doesn’t matter in the end, horror is not location specific. This is what exit music does, it undoes the complexity of horror that cannot be comprehended as a monolithic outrage but must be engaged with piece by piece. Popperwell’s complex layering and coding of the work deflects and delays meaning so that each realisation as it is dis-covered has the force of revelation.

We come to the last room expecting the ultimate horror and find the everyday, we expect the authentic, witnessing object and find clean copies. His use of banal materials is crucial referencing particular historical facts (the Buna factory, the fabric of the camps) and in the unavoidable connection to Arendt’s “banality of evil”. For it is precisely this that Popperwell wants us to know, that ordinariness does not have the power to deflect horror. Any place could be the place.

This is the meaning too then of Popperwell’s Hrönir, to unpick the Holocaust we need things; the piles of hair, the suitcases, diaries and stolpensteine in Berlin streets have to stand in for the lost.

Borges narrator notes that in Tlön, as objects are generated by need so can they be saved by memory, “sometimes a few birds, a horse have saved the ruins of an ampitheater”. Or a lake and a stand of trees.