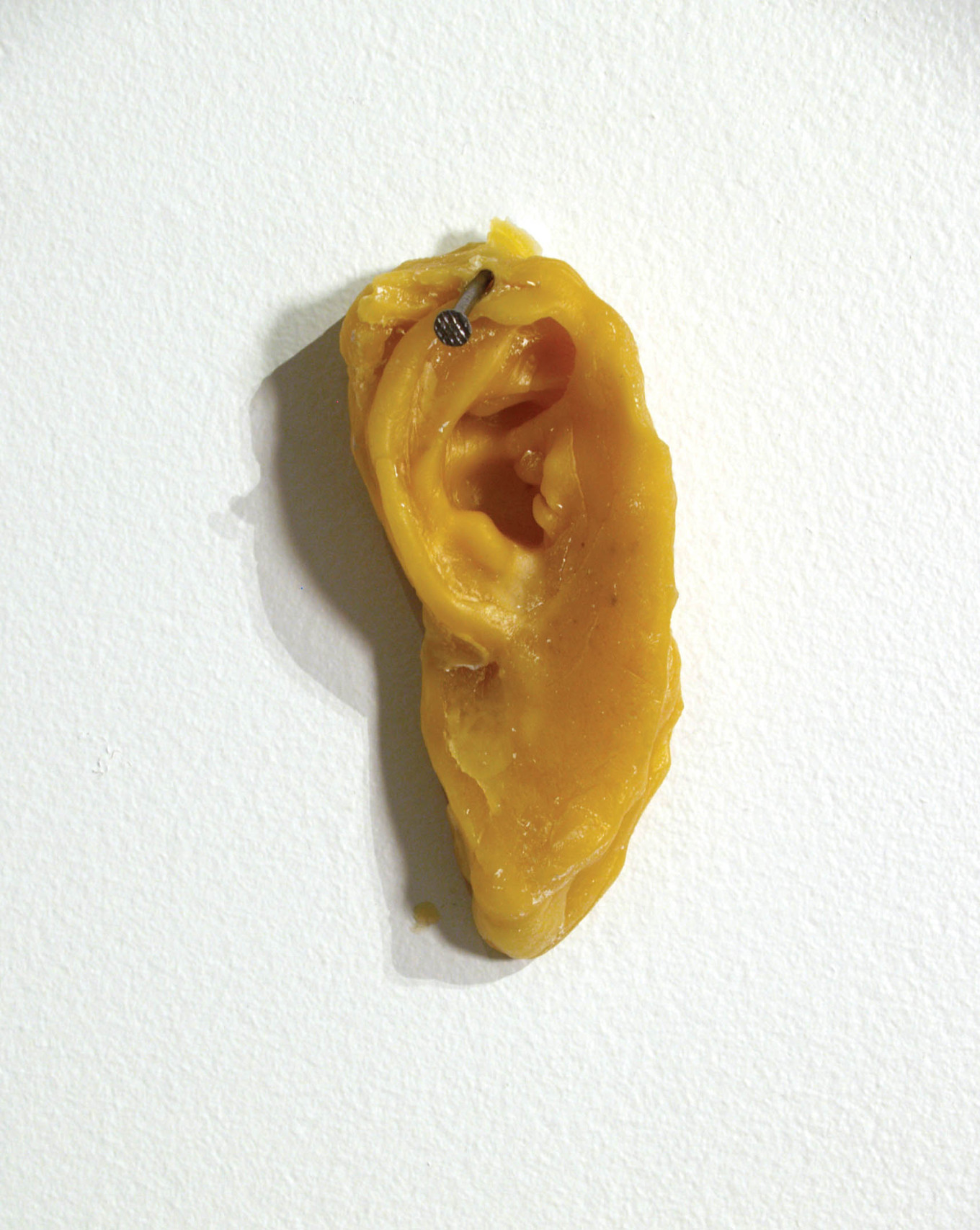 Evidential & elemental: cutting to the corrosive core of life itself

Corrosion is at the core of things, that process that once begun seems to accelerate towards dissolution, the reduction of things to their fundamental forms. The elemental is here everywhere in evidence, black carbon, rusty ochres, bloody ink, the crusty surfaces, the tearing of paper and the salt crystals heaped in tidal lines along the cool concrete floor.

A large ochre form is crusted on the floor, an unhealed wound its’ centre heaped with bright salt crystals, a fragile ti tree fence (shelter, hide?) hangs nearby in a sinuous curve, on the wall next to it wax ears (cast from life) are pinned with galvanised nails to the wall, the connections between these elements tenuous but potent, unmistakable, Judy Watson’s salt in the wound could be our corrosive core; blood, rust and brutality rendered in powdery ochre and soft wax.

For the artists in Shards, Judy Watson, Yhonnie Scarce and Nici Cumpston fragmentation becomes not breakage but a loosing of bonds and an examination of the spaces revealed, a productive process of reconstruction. These elementals of colour and texture, of the organic processes of growth and entropy in the work resonate and reflect, building a web of multiplying interconnections and opening up spaces and pathways for this accretion of meanings.

Watson’s artist’s book, a preponderance of aboriginal blood, shown as sixteen etchings uses archival material on the aboriginal protection system exploring these systems of bureaucratic control over Indigenous people and the complex classifications of proportions of aboriginal and white blood that lay at its core. The etchings are quiet, stained with bloody ink, the work shocking in the absolute matter-of-factness of systemic oppression; the use of “breed” on forms to refer to indigenous people, the casual arrogance of an official who simply cannot understand why an indigenous woman excepted from the protection act might think this entitles her to vote. Reading the work is an oppressive experience, the ink almost obscures the text in some cases forcing the viewer into an uneasily close intimacy, it feels like entrapment, smothering in layers of paper. Watson’s use of the chine colle process is refined and potent layering and binding the language of control to the base body and overlaying this with the red ink that seeps and stains exposing the fear of the irruptive other that drives this need for classification and control.

This layering is echoed in Yhonnie Scarce’s family portrait in the roughly peeled off labels on the grog bottles, leaving behind white strips and shreds. Starkly, purposefully black and white, contrasting with the reds and ochres of Watson’s work and the greys and pastels of Cumpston’s river images, family portrait is a series of floating white shelves stepping down the wall in a familiar genealogical pattern. Most contain an empty bottle (bourbon, whisky, beer, metho), some a rough black cross textaed on the label, all a rudimentary stick figure bound in black thread inside denoting a death from alcohol. Family portrait couldn’t be framed in starker terms but Scarce inverts the expected, the empty shelves are those of family not effected by alcohol, resistance is marked by absence and blankness becomes populated, hopeful.

Where blood and alcohol flow as a connecting thread through Watson and Scarce’s work, water or its absence is the core of Cumpston’s large scale images of Nookamka (Lake Bonney) where drought and water mismanagement have starved the lake possibly beyond saving, yet the pastel tones of Cumpston’s images of dead and dying trees on the exposed lake bed robs these of the urgency that would crystallise these into powerful images.

Watson’s women’ neckbands and asmodea is revelatory, sunk into the stained ochre ground of the raw canvas, the monolithic form of Goya’s mountain Asmodea is rendered in an odd refulgent green, over and above the dark outline of an indigenous woman’s neckband floats like an umbilicus. With this connection of a woman’s adornment and Goya’s history, it is impossible not to think of Goya’s depictions of the individual and particular horrors of war or to resist the almost visceral realisation that there was a war and it was here. Yet the neckbands float as if in flight, out of the frame, loosed and unbound.