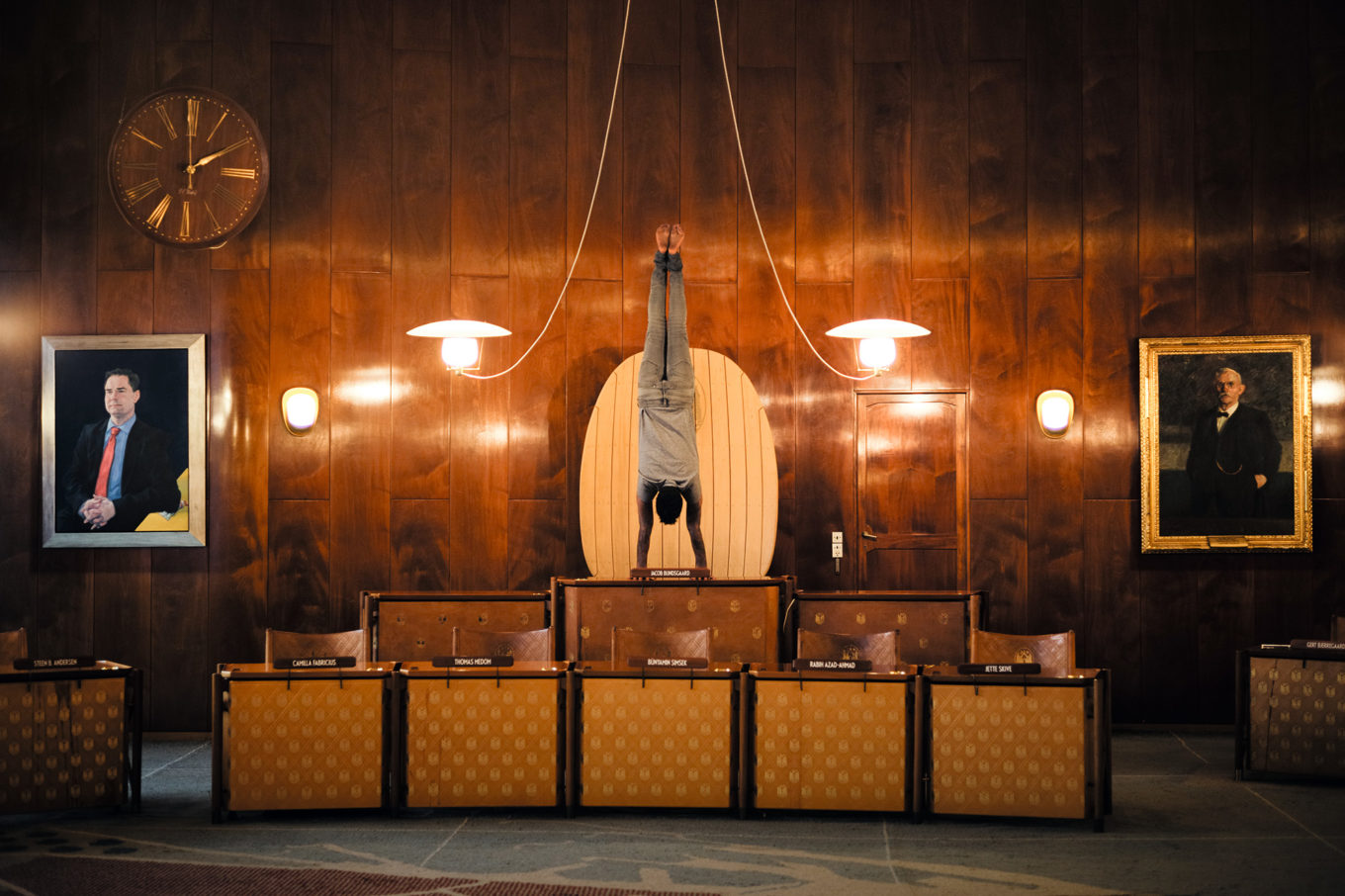 We live in bubbles we’re told. Not the benign soapy kind but filter bubbles, echo chambers of the like minded, served up our own views, reinforcement of the ‘more of what you like’ kind fed by algorithms, news (real and click bait fake), social media, Russian troll accounts and the like. Difference becomes danger. Solipsism in extremis.

Of course we’ve always lived in bubbles of one kind or another, but it seems now that these are more impervious, able to be weaponised by causes, organisations and individuals without our consent. Living in a schismatic world where difference is usually constructed as both binary and necessarily adversarial, meaningful connections and bonds across difference seem more difficult and critical than ever. To live with difference means a stepping beyond these safe and sealed bubble worlds.

The 2018 Adelaide Biennial, Divided Worlds, belying the complexities and troubles alluded to in its title seeks to counter these schisms with a survey coalescing around ideas of difference, strength and diversity. Curator, Erica Green summarises her approach as: ‘…rather than foretelling conflict, my focus has been on …an exhibition that celebrates the enduring role of art and culture. Divided Worlds offers an opportunity to experience an alternative dimension- one where ‘difference’ is the natural order of things, and a strength to be celebrated’.

Moving past the somewhat problematic characterisation difference as ‘natural’, what is on show here is a remarkably various selection of works and worlds realised in sculpture, video, photography, glass, ceramics, assemblage and painting. Each of these worlds is individually reaching toward internal order and unity but markedly not toward each other. This lack of connection between these discrete worlds is one that remains botheringly at the heart of the show and detracts in the end, from its strength and resonance.

There is nothing overtly controversial, noisy or confrontational here, no ‘star’ works; rather the mood is egalitarian and reflective. Few works are overtly political and these are the quieter ones, Vernon Ah Kee’s world wall I Witness, is a statement of identity and persistence, as Khaled Sabsabi’s modest hand painted postcards of ruined Beirut, 99 Names are a reclamation of riven space and memory. 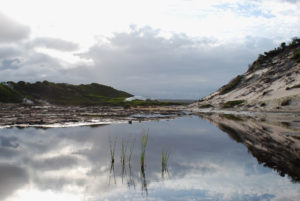 Julie Gough’s installation of video and colonial notebook larngerner: The Colour of Country is unflinching and tender as her work so often is. Gough has reclaimed a colonial notebook of explorer Norman B Tindale from the South Australian Museum and sets it against a book-like two screen video installation of her denuded country. The notebook page shows a square of painted brown, a guide to the ‘true’ colour of indigenous skin for white incomers. The camera moves slowly through country against this colonial classification and in this action Gough removes her people from the anthropological in a symbolic restitution to country. Other works with political intent are less successful, Emily Floyd’s large installation Icelandic Puffins that spells out the names of the individuals responsible for Iceland’s financial fiasco is glossily attractive but without detailed knowledge, critically empty.

There is in these worlds: inclusion, exclusion, radical otherness, strangeness, expansive worlds and worlds that seem almost hermetically sealed against entry. Roy Ananda’s imposing game world bringing the virtual into timber and paint is physically impressive and a spectacular entrance to the gallery. While it seems to hum with its own contained energy, it doesn’t easily invite entry to those ignorant of the rules. So too Pip and Pop’s fluorescent sugar grotto tantalises but keeps its borders secure. Inaccessible to those without insider knowledge, they have all the glamour and allure of the unknown and unattainable. Against these sealed spaces, Patrick Pound’s The Point of Everything, an eclectic agglomeration of objects around the idea of the point of and pointing, drags everything, references, allusions, tangible objects and intangible concepts, towards itself vortex like. Also the monumental and expansive work of the Ken Sisters and the looping starry imagery of Daniel Boyd embodies the generosity and interconnectedness of their indigenous worlds without end. 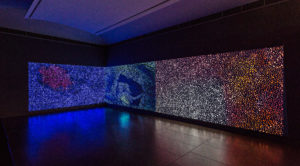 The pull towards unity and order that underlies much of this show, finds itself in many works in nature. In Amos Gebhart’s four screen video installation Evanescence, the divisions of bodily difference, age, gender, and colour are arrayed against elemental landscapes of salt lake, waterfall, desert and rock formation. In ritualistic choreography this physical diversity aims to undo ideas of the normative body but falls into the trap of positing the body as the primary source of truth. Focussing only on superficial visual differences, the lived difference of these individuals bodies outside of the normative simply doesn’t’ come through here.

Tamara Dean’s photographic series In Our Nature (2018) places the human cycle of life against the seasons and longer cycles of nature in the nude body within nature, photographing people within the Adelaide and Mt Lofty Botanic gardens through the seasons. With its immersion of bodies in nature, it is located perfectly within the fecund multiplicity and modest grandeur of the Museum of Economic Botany. For me, those images with amateur models are less studied and the most arresting, the Sacred Lotus (Nelumbo lucifers) series with lotus and feral youth in particular.

While many works reach towards order, Tim Horn and Patricia Piccini’s work is quietly disruptive in its unaccustomed orders. The lustrously beautiful wall works in Tim Horn’s Tree of Heaven series appear natural and unnatural, coralline, tree like or resembling massive jewellery or candelabras with monstrous sized pearls. Horn’s work possesses an inherent formality and strangeness that makes it far more than decorative, Full Fathom Five (Gorgonia) is enough to give away these currents of transfiguration and loss in the work. Neither fish nor fowl, nor good red herring their transmutations and unclassifiability are uneasy making. Sombre in tone, it’s hard at this historical moment not to read these as an elegy for the slow catastrophe befalling marine eco systems. 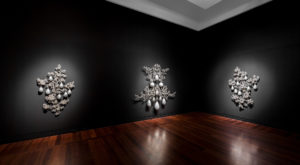 Patricia Piccinini’s oddly skin coloured wall works Avian Trilogy (Eagle in flight with Helmets) sprout an eagle made of human hair, tresses, eggs, fleshy organs, boots, a nest, these dislocated parts abject and disturbing. An uncanny othering of human and avian bodies through hybridisation, these incomplete bodies are less easily empathised with than her complete creatures and so more viscerally unsettling.

Where other works locate strangeness and otherness outside the body, the work of Tim Edwards and Kirsten Coelho has a strong interiority and self-sufficiency that comes from highly individual ways of seeing. Glass artist, Tim Edward’s precise vessels appear almost as graphic representations of the idea of a vessel. With their defined outlines and forms they sit between the practices of drawing and glass, two and three dimensions, unsteadying both. Kirsten Coelho’s monumental assemblage of ceramic vessels, beakers and plates is breathtaking. Shown in low light on along a central raised plinth, initially it appears on the edge of monochrome and almost two dimensional with the gravitas and rhythms of a Morandi painting. The mass, elegance and repetition of these finely made pieces set up relationships that are charged and mysterious. 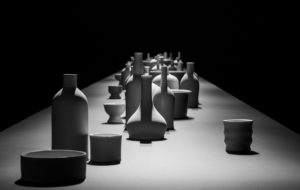 The repeated presentation of these individual worlds, so various in their difference creates a persistent feeling that all difference is somehow explicable, that it is available to be understood, neutralised perhaps by this presentation and observation. Avoiding reductionism and superficiality in this celebration of difference, it must acknowledge that there are differences, cultural, historical, of thought, belief and practice that will and should remain inaccessible to those outside them.

The engrossing strangeness of Haydn Fowler’s Eel Song asserts the necessity of this. A 3D computer animation following a mythical eels journey against a strange subterranean place and including sacred Maori songs selected and performed by Maori elders, it speaks movingly to ideas of Maori and ecological sacredness, connection and value.

There is some very fine and engaging work in this Biennial and while difference and diversity abound, connections between these different worlds, less so. Here there are thirty or so isolate worlds with little to connect them, Little that reaches out beyond its boundaries to suggest how difference might be productive.

In sociological terms this would be described as lots of bonding social capital, that which binds communities internally and very little of the bridging that brings disparate groups together. The danger of this evident in Professor Robert Putnam’s memorable quote; “ In other words, bonding without bridging equals Bosnia.” (1)

Perhaps it is beyond the remit of the Biennial to do this, to propose ways in which difference might be lived with and negotiated but it isn’t beyond the reach of art or culture. The one work that perhaps presents ways in which difference is not isolate, is Angelica Mesiti’s large two screen video installation Mother Tongue (2017). Mesiti’s work concerns connection and communication, often wordless and physical; dance, rhythm, whistling, physical touch and movement in space. Mother Tongue is filmed in Denmark where music and ideas of communality and democracy are entwined in the practice of Alsang (all sing). The Danish sing in school, meetings, choirs, the most remarkable instances as acts of resistance to wartime occupation, it bonds and connects the community through this simple practice.

Here, there are refugees from wars caused by the schisms of difference who sing and move; young men perform a middle eastern wedding dance in the housing development the Gellerupparken (a Corbusian utopia unrealised), Danish civic officials sing of landscapes, children of a utopian place, Somali singer Maryan Mursal of exile and longing, a young Syrian girl is supported through space on the shoulders of others, a female musician plays a frame drum culturally forbidden to women improvising her own rhythms while a acrobat moves ritualistically around council chambers. Music, movement, physical connections generate a communality that is both evolving and threatened. Here difference is volatile and generative, connecting and bonding.

Invoking the language of difference and division yet in avoiding the difficulties and complications of difference in presenting only difference without connection, the Biennial undersells the potential of art and culture in making connection and changing lived experience. To see, to acknowledge, to celebrate is important; to reach out beyond our bubble worlds and build bonds is the core stuff of humanity.