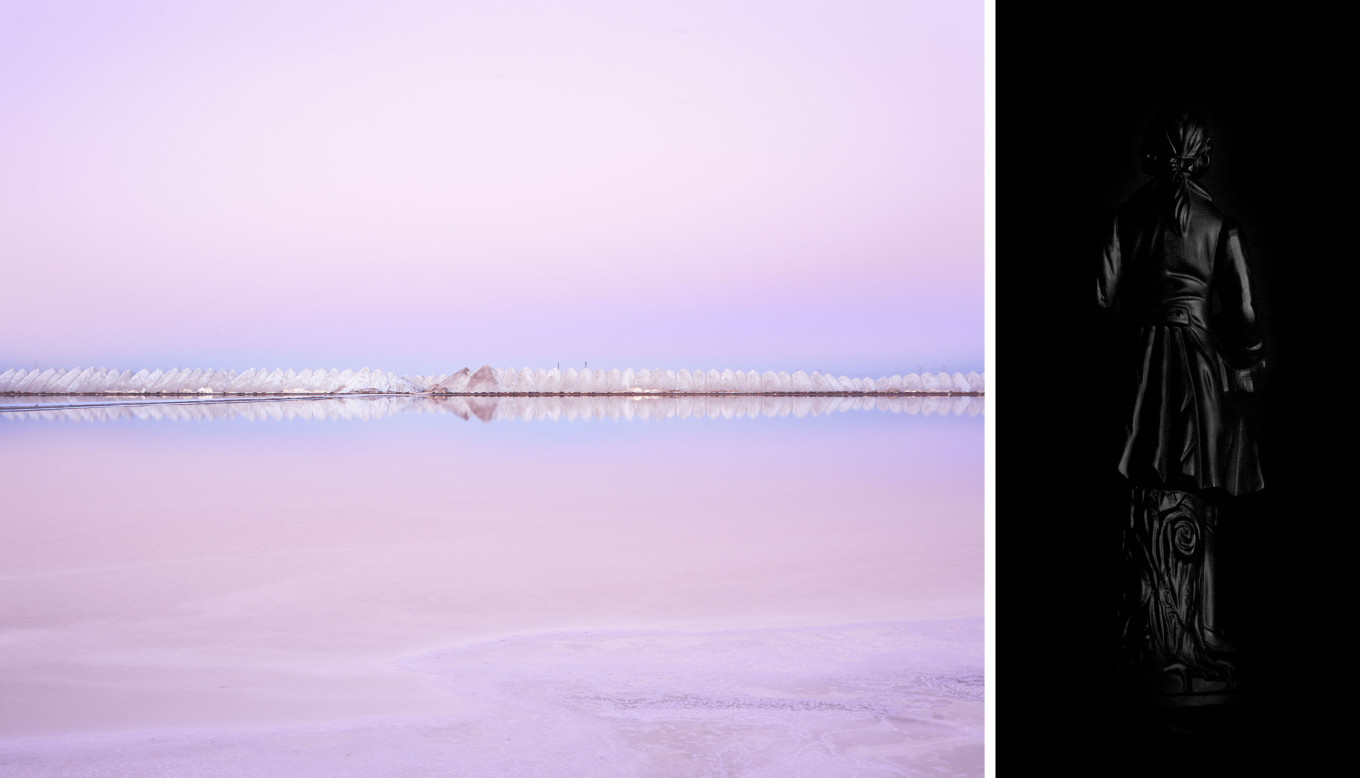 Photography is and has always been a game of shadows. The photograph an object made of shadows, light and time. The earliest images, thin chemical ghosts floating on a polished mirror and erasable by a thumb. Fragile and contingent, these photographs, needing the right angle for shadows and light to resolve into an image, were as much about how to see as being images.

For we had to be trained into seeing these elusive chemical ghosts. We needed to come to terms with the endurance of the life that was no longer there but continued in our sight. We needed to become accustomed to the persistent presence of these complicated shadows, to the rupture that opened up when the material world and time that we in lived in and through was shadowed on a plate.

We may have been accustomed to it in life, in stories, in memory but with photography we needed to become accustomed to this new and persistent haunting.

It is in this space, that which Martyn Jolly concisely calls “the unbridgeable fissure between reality and the uncanny copy of that reality” [i] where the photograph’s ghostliness inheres. Where presence and absence, past and present, material and resemblance vacillate eternally in irreconcilable contradiction. And it is in this space that is always already haunted and that opens itself endlessly up to haunting that these artists move and work. Their concerns and compulsions are rooted in these boundary zones and shadow territories where multiple narratives and possibilities jostle and contend, where demarcations are unclear, where past, future and present coexist.

Boundary riders of sorts, these artists move in and through the spaces of landscape, history, of self, embodiment, memory, and identity, of the unrecorded event, of trauma, and persistent absence. Not patrolling or enforcing but sensing, recording, acting in the world producing images that are not simply document nor end point but gatherings of presence, enactments of memory, ghostings, moving through place and time unsettling the world’s certainties. 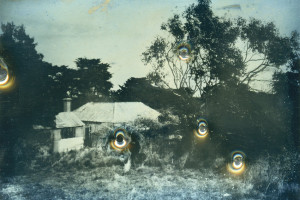 In engaging with significant sites as Blanch and Tylor do, in excavating memory as England does, in Taylor and Kneebone’s unsettling of colonial histories; as Kimber, Paauwe, Lane and Greenslade stage the shades and spectacle of identity, its composition and decomposition, these artists are undertaking a form of haunting themselves. They are ghosting, shadowing, moving through these spaces and states of indeterminacy and ambiguity trying on and out, all the as yet unenacted, unrealised potentials and possibilities of the world.

“the reason my molars are so broken, is I spend too much time ghosting with the likes of you and yours”[ii]

To ghost is to move in haunted spaces, to run with ghosts and to invite haunting in all its disruptive and productive potential.

Alice Blanch’s landscapes are the presentations of her journeys through and in the environment. Her view is neither the Romantic projection of landscape as self nor the scopic gaze. Taken on a box brownie with overlapping frames and shadowed horizon lines, these panoramas stretch out expanding time into the duration of experience. Of remote or uninhabited locations, they are suffused with presence invoking previous habitations and suggesting an immanence of presence. Rather than landscape, these are tracings of the embodied experience in the environment, of being and moving in landscape and of being open to its presences in and through time. 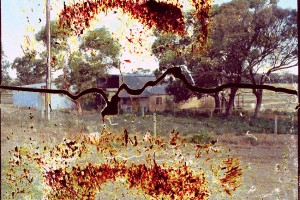 The persistent force of the past as memory is painstakingly excavated in Odette England’s work. Impelled by homesickness, England enlisted her parents to revisit and walk the lost family farm with negatives of earlier images of the farm strapped to their shoe soles. Retrieving these scuffed and fragmented negatives, she photographed them with fissures and damage intact creating complicated palimpsests of place and memory redolent with absence and loss. Ghosting through her parent’s presence in a place personally significant, these enactments of yearning reassert memory as active presence through an intertwined past, future and present.

Within James Tylor’s daguerreotypes, the ghost is ever present, as daguerreotypes vacillate between negative and positive depending on the angle of view, holding absence and presence together in their delicate surfaces. The images seem unremarkable in themselves: a hut, a gully, a hill, a river mouth yet are imbued with a seeming significance beyond this ostensible subject. That these are sites of trauma and unquiet histories is radically reinserted into the present through the bullet marks pocking the plates and rupturing the image.

Further complicating and disturbing colonial histories is the work of Sue Kneebone and CJ Taylor in their enactments of historical events and fictions. Kneebone has unearthed a colonial murder of unusual brutality. The site, a mangrove swamp full of scum, drifting mist, dead animals and domestic detritus flows across three frames. Reflections and shadows multiply and populate this space that appears the site of recent and shocking but unseen violence. Its stillness ripples this violence through an expanded time moment, as its witnessing reactivates this event into a continuing past/present. It is happening then and now.

CJ Taylor’s glossy and hyper real images are an event never happened that asserts itself persuasively as possibility. Australian snakes, introduced flowers, a barren but beautiful salt pan and black colonial figure set out an enigmatic, almost cinematic narrative invoking dispossession and resistance, unsettling the seeming certainties and reassuring fictions of colonial history. It too reanimates past into possible futures and as yet unacted potentials.

For Tylor, Blanch, Kneebone, Taylor and England the persistence of presence, compresses time into an active duration where past, future and present act upon each other continuously and where to both act and witness is a manner of doing that acknowledges these presences and reactivates them into present and future. 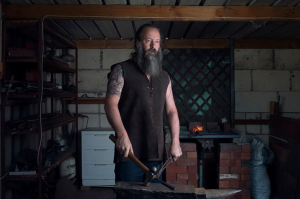 As these artists play out potentials through place and time, for Kimber, Paauwe, Greenslade and Lane, the body becomes the site of haunting as identity is seen and experienced through and in its ghosts, forms and accoutrements.

Kimber’s images of masked children invoke many ghosts, of identity and its superficialities, of photography, and of cinema’s mining of it. The masked girls recall both Dianne Arbus’s “Identical Twins” and Kubrick’s iteration. These children seem to be playing at future adult identities that are unfitting and uncanny suggesting both the apparent inevitability of these identities but also their inherent fragility.

While Kimber’s children seem able to put on and off these masks, within Paauwe’s images of girls, feminine identity appears as a ghost and a fiction, composed of the projections of others and the material accoutrements of femininity. These physical trappings, hairclips, clothing, fans signals the feminine but obscure the subject’s individuality. Yet this obscuring feminine here seems a protective film for the elusive and nascent self concealed beneath.

For Lane, her subject’s identities are constructed piece by piece, pulled from the past, the fictional future and present and lived in these frames simultaneously in an extended acting out where fiction and real blur together. Greenslade’s modified bodies appear as constructions of longing, as presages or future ghosts of self where desire for connection shapes the body.

These works are invocations, intimations, enactments and iterations of the world’s potentials and becomings. They are not what is or has been but what might have been or might be. It is this ghosting, this moving through forms, spaces and possibilities that brings them back into play as affect, as materiality and opens up the world to what is virtual in it.

Acts and enactments, doings and performance, the work that is done by these artists is work of becoming, of finding and excavating the world’s potentials and possibilities. This is not representation of the world as it is, but making the world through this ghosting, through this acting and enacting, this “incessant presentation, continually assembling and disassembling, timing and spacing, worlding”[iv].

Running with ghosts, breaking our teeth, being haunted and inviting haunting is to unleash the virtuality of the world, its complexity, diversity and experience. To pay attention to these ghosts is to bear witness to what has been and what becomes now possible.

[v] Hill, L Archaeologies and Geographies of the Post Industrial past, 2013