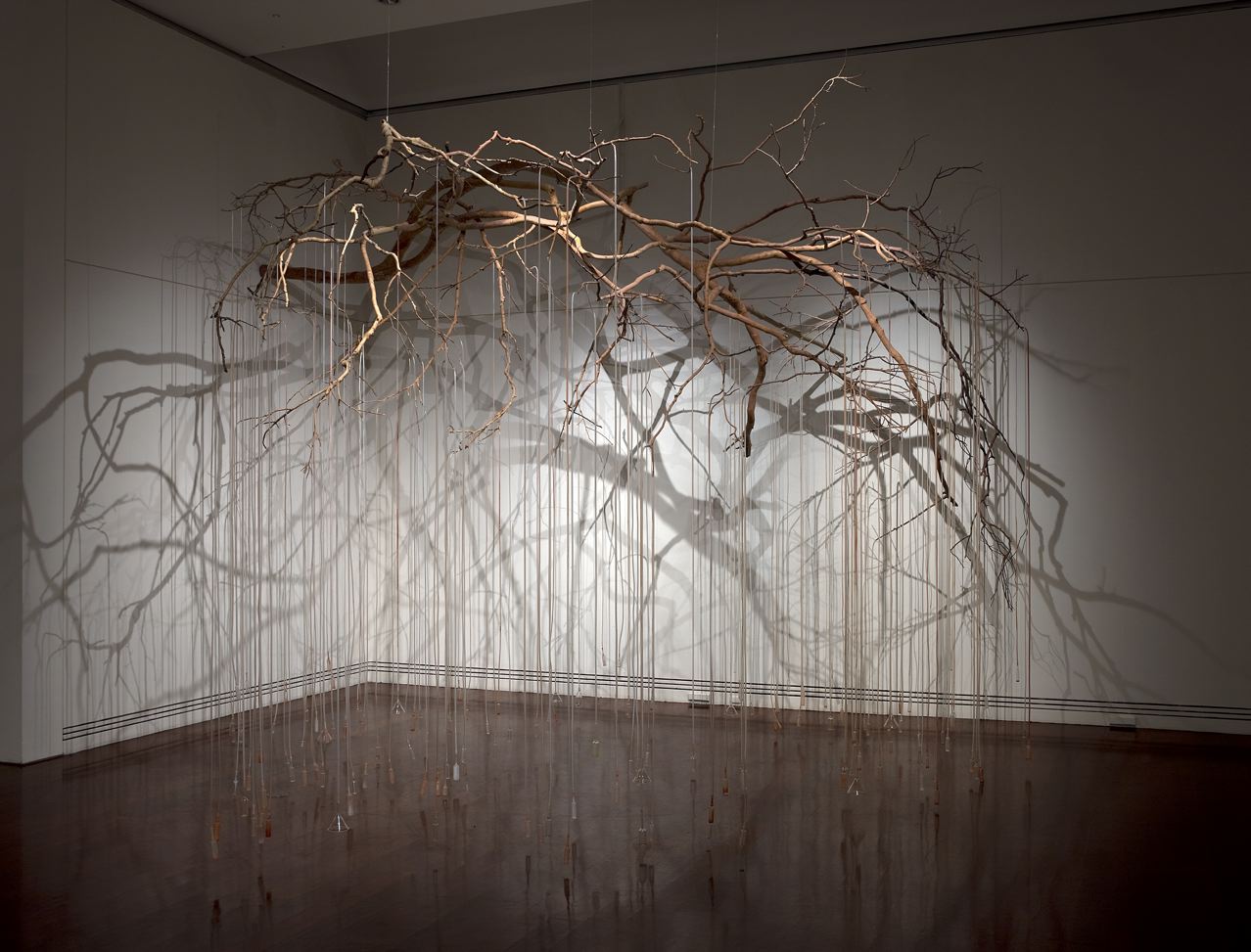 ADELAIDE FESTIVAL OF THE ARTS 2008

“Air: the fluid which we breathe and which surrounds the earth. It is invisible, inodorous, insipid, transparent, compressible and ponderable”
Oxford Medical Dictionary

“Listen for the air”
Nursing Manual 1955

The tidal flow; the volume of breath inspired and expired in each normal, quiet respiratory cycle. This unobtrusive, normal conversion and exchange.

There is here a breathing space, an intuition of air. There is another unseen process taking place, a metabolic one of conversion, change and production. In certain works- those of, Janet Laurence, Bronwyn Oliver, Tom Muller and Hossein Valamanaesh – there’s an attentiveness to the nature of this process, to the change from form to form, to the physical forms and materiality of this transfiguration and to the works own materiality.

There is a kind of unfixedness, a fragility in each that evokes the process and connects each work to the next in a kind of transformative chain.

Heartwood is the soft tissue core of the tree, the conduit for the great chemically bonded chains of water molecules that the tree sends surging (at lineal metres per day) around its body. From where it sucks the moisture from the earth to the exchange of oxygen for carbon dioxide from the leaves, the liberation of water from its molecular chains back into the world as a gas. Over and over, in each quiet normal respiratory cycle. An injury to the heartwood, any disruption breaks this chain of water, endangering the tree.

Be alert for air hunger, for the labouring of breath, the increase or decrease in frequency and depth that marks the breakdown in the lungs capacity to convert and exchange. Be alert for this failure.

There is breath here and injury as well.

A massive gum branch, Lemon Scented (Corymbia Citrodora) falls out from the gallery wall. It has, in its extremity exuded scores of long, pliable IV tubes stoppered with glass vessels, the way that trees exude sap to cover a wound. Like its own vascular system thrown inside out. Some tubes ends in phials, closed, conserving, saving the trees own fluids. Others end in glass funnels, hanging down, as if to concentrate and collect the ground water and dew. A tree gasping for breath, for water. 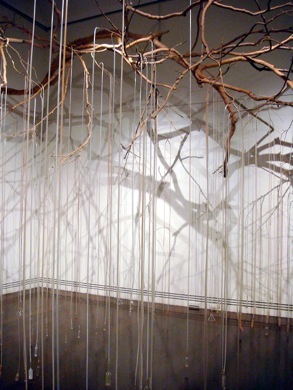 In Heart Shock Janet Laurence gives us the wounded tree (broken and bolted together again in the gallery) taking over our systems and implements to survive.

Carbon Heart, might be the reserve, the supplementary air. A deeply burnt tree in a burnt landscape appears on large, square transparencies, the image reflected, softened, made indistinct against the mounts of metal, mirror and burnt wood. The tree, literally shocked to the core, hung about again with IV tubes and coloured fluids, seems wounded beyond help.

Yet it shows signs of regeneration already, vivid green branchlets spring out from nubs on its sides and I’m reminded that on this continent these plants need fire for their regeneration. This, I think is a Banksia, whose cones you can heat in an oven til the seeds snap.

And yet, even with this hopeful knowledge, this is nature in extremis and the depth of the falsity of our fantasies of an infinitely robust, endlessly resilient nature is undeniable.

Each is an event held in stasis momentarily. One breath does not necessarily follow the next. But might.

The held moments of Carbon Heart andHeart Shock connect deeply with the concentrated and profound stillness of Bronwyn Oliver’s work. Work that I cannot see now without a sharp and particular sadness that seems contained in and inseparable from such rigorously elegant forms.

Oliver’s works Warp and Stroke appear as an refined extraction of plant forms, as if she has reproduced and magnified the complex internal structure of the plant but also distilled the essence of its living force. Almost conical they grow from a point to an open funnel like end, the intricate patterns and the weight of the meticulously welded copper wires giving them a fixedness that belies the fluidity of their sinuous, curving forms.

Form, material and process speak of air enclosed, of matter cleaving together, of circulation and flow. They are at once both airy and monumental.

In their shadows these forms bloom and flourish on the walls behind, as if, freed from the weight of metal, they continue this complex system of elemental exchange, of the vegetal circulation embodied in their forms. 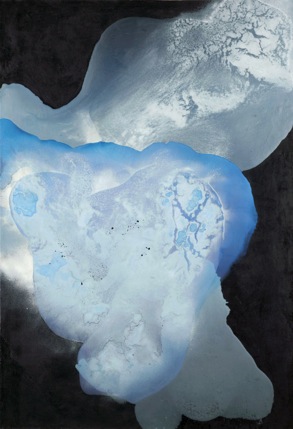 The vaporous, cloud landscapes of Catherine Woo’s Blue Sky Project- Make my Day seem to be expanding beyond the edges of the image, about to loosen bonds and collapse, held in check and bonded together only by the tight grid of the 36 images abutted together. Sheeny surfaces and aluminium supports evoke salt, minerals, the processes of evaporation and distillation, when molecular bonds fray apart and water becomes cloud, leaving behind the crystalline. A trace and a history.

Within their squares, these clouds lose all scale, suggesting all views, the airborne, plane-borne view from above, the rarely experienced but intimately known views from space (outside of air) and the small, salt pools, algal blooms.

Form is fixed in the crystalline structures, evanescent in the clouds, a circuit of exchange that stilled temporarily in image continues constantly elsewhere.

These aeriform bodies change nature, descend, becoming the fine threads of azure water in Tom Muller’s Liquid Empires bar graph field of glass tubes standing in for the worlds rivers. Invoking test tubes, skyscrapers and rain gauges, the fragile tubes seem like a master plan for an impossibly sleek and clean city, one that might distil its moisture from the fluid sky. 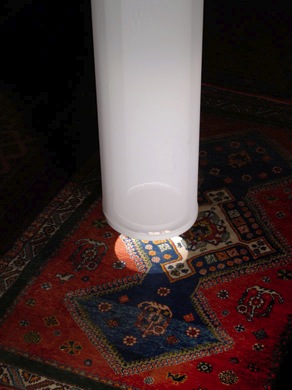 This graphic field of tubes thrusting up into the atmosphere is inverted itself in form, in the downward hanging columns of light and dark of Hossein Valamanesh’s Leave Your Shoes Here. Tubes of light that seem substantial are spirals of gauzy fabric weighted to hang heavily (they seem to pull towards the floor), set out in chessboard rows of black (unlit) and white (lit), they end inches above the layering of Persian carpets.

In line with the square of carpets that runs diagonal to the room and lap up its walls, the columns form a grid, small circles of light anchoring the white columns to the floor, setting out a plan, black columns receding. Commas of light bring the rich detail of the carpets sharply into focus, setting out patterns and pathways.

An elemental architecture emerges, a transparent layering of grids, the squares and oblongs of the carpets, the square of the room broken by the overlaid one of the carpets. Wells of space form between each column, dividing and charging the space, becoming a porous grid.

Space here becomes awareness, the expanded field and the close focus. Asking of us a particular kind of attention and care.

There are experiences here available only to the involved observer, the swinging of the columns on the displaced air as people move between them (moving it seems with the exhalation of the breath) is a small rippling event.

The shared architecture between these works, of volumes, columns, tubes, lines, of vascular systems, clouds and changeable vapours, embodies the spaciousness of breath, of the flows of inhalation and exhalation, the constant circulations of form and matter, of stuff and being.

This attentiveness, almost solicitude towards the present moment and the process recalls Thoreau’s difficulty in doing the same, his personal forest dilemma: I am not where my body is, I am out of my senses. What business have I to be in the woods if I am thinking of something out of the woods?

Absorbed in the forest of the senses, it is too easy to fail to listen for the small intent moment, those that occur so quietly, delicately in these works. Thoreau’s question is implicit here, what business indeed have I to be in the woods, if it is not the woods that I am attending to?

These works, moment by moment impel us to listen, to attend to every moment in its occurrence, for each exhalation, to listen for every breath. 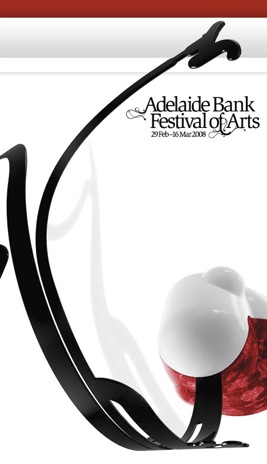