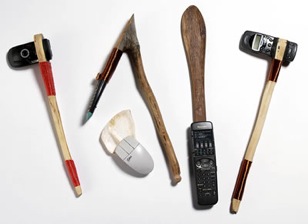 For me, Museums have always loomed forest like, thickening and dark with the density of objects, stories and voices held within. Almost cacophonous with competing histories, the Museums overabundance seems to need to be encountered piece by piece to be understood. Each of the artists involved in Inside SAM’s Place this year have intuitively understood the difficulty of tackling the Museum head on and instead have made targeted forays into the Museum.

Inside SAM’s Place is the partnership of the South Australian Museum and Craft South where artists, given access to the Museums collections and archives, generate new work (to be exhibited in situ), in response to some aspect of their investigations.

Niki Sperou, Sarah crowEST and John Hayward have threaded a way through the thickets of difficulty and left, if not a breadcrumb trail, certain significant objects to entice us along their particular paths. Whilst these paths haven’t directly intersected, they seem to have passed very close by each other with overlapping concerns forming over the year, a sustained if loose enquiry into the formations of meaning in the Museum and notions of collecting, ownership and authenticity.

Niki Sperou’s Ethnographica , her plaster encrusted domestica presented as warlike array, recast the Museum as a complicated stage set with its mechanics and wires revealed showing how objects are given value and meaning through these techniques of display. Ethnographica cleverly demonstrated the persuasive powers of display, the loaded nature of looking and in peeling away these constructions, let us look at the Museum’s objects with a newer, cleaner eye.

Sarah crowEST made a kind of scavenging, magpies use of the Museum, roaming and collecting. Her blank, dislocated little creatures looked as if they had wandered the Museum adorning themselves from the exhibits to assemble in the North Foyer like an alien tour group about to bussed off to the next best thing on the planet. For all their Midwich Cuckoo qualities (and however worrying I found them), there was neat consonance between their souveniring tendencies and our own skimming tours of the Museum, collecting facts and images, our attention intermittent and superficial. They’re deeply ambiguous creatures and their behaviour just as ambiguous with crowEST not taking any definitive position here. While their light fingered ways could be read as an act of repossession that, in the change from artefact to personal possession shows up the contingency of meaning (and possibly alludes to past collecting practices), they slyly suggest a deliberately isolated, self centred approach to places like Museums, not “what does this thing mean” but only “what does it mean to me? “. This selfishness hints at the subjectivity of experience, of limits to the Museums ability to elucidate and the real impossibility of expecting objects to stand in for the world yet disturbingly it also reduces every object to a kind of atomised individuality, denying the complex webs of interconnection between things and ourselves.

John Hayward’s Tooling Up is the last part of Inside SAM’s Place for 2007 and his collection of handmade tools (hammers, axes, adzes and cutters etc) draws from the Museums collections of indigenous tools, mirroring their forms and marrying technological cast offs, (remote controls, mobile phones, computer mice and cameras) with the skilfully handmade to pull us in with the familiar and desired things.

Lovingly crafted, these hybrid tools have the same potency that seemingly ordinary objects found in fairy tales do when we suspect that they might show themselves as magical, transformative things. It’s this idea of potential that’s so seductive, in both tools and technology when it connects to a sense of capacity in our selves, the sense that with the right tools we could do more, be more. The integration of potent and familiar technology and the utility of the tool forms is an elegant distillation of this idea into object form. That they are hand held and activated by our own action connects deeply to a feeling of our own individual agency and control.

They’re immediately and sensually appealing objects, from their brightly coloured electrical wire bindings to the shaped and smoothed adze handles that look like they’d be good to hold, satisfying to use, the TV remote, camera and mobile phone axe heads are attached securely and they look right, powerful and genuinely functional. The reuse of technological discards gives them a mend and make do air, bringing to mind both Depression era thrift and the post apocalyptic but more hopeful than not. These are tools that promise us that they can really do things, to really take us somewhere. It’s precisely this that they so cunningly and alluringly promise in their image of super utility and this that resonates so deeply with our felt sense of personal potential.

Displayed alongside the indigenous tools they have an unassailable air of authenticity, as if they are the remnant of some little known but sophisticated tool making culture. The skill and care evident in their making, the precise fitting of part to part speak of knowledge and experience and fortify this sense of them as real artefacts. So persuasive is this, that most viewers unquestioningly accepted these as ‘real’ artefacts, seeking to fit them into known histories, with one schoolboy confidently advising his mates, “this is what they made with all the junk they picked up”. (Who “they” were I never found out).

Beguiled and convinced by their craftsmanship, authenticity and utility, we find that all is not what it seems, The dual tools; Cut and Paste, Brush and Gouge, Hit and Fork offer themselves up as uber tools, with the named implements expertly attached on each end of a naturally forked branch, they seem so promising but they’re ridiculously over engineered and are cumbersome, probably impossible to use. And so it is with the axes and adzes, as tools they’re almost useless because of the fragility of the plastic remotes, to use one as the impact head of an adze is in the end ludicrous. Where craftsmanship convinces, technology fails. In the end, these are Dada tools, full of inflated claims, images of utility only, making obvious the shortcoming of technology’s promises. Like magical objects, these hybrid tools deftly feed into our fantasies of technological mastery and just as deftly dissolve the fantasy when they fail the only true criterion for a tool, to be simply useful.
As technology fails on seemingly every level except image and aesthetics, the indigenous tools come into sharper focus their ingenuity, true usefulness, elegance and value apparent. The seamless marriage of technology and the authentic handmade in these forms connects the new hybrids and indigenous originals as belonging to the same order of things and draws them into a circuit of empathetic exchange. Cast in this position, imagining being the toolmaker, user, the fundamental similarities of the tools emerge, technology is reduced to its proper unmagical status as tool, and the otherness of the indigenous originals falls away.

Hybrid/original, authentic/ersatz, useful/useless, primitive/sophisticated, ourselves/other all hover around indigenous and hybrids obscuring the view, John Hayward’s intriguing and witty tools through their convincing failure to be simply what they claim are an woodcutters axe, shifting and skewing ideas to clear the view.
Following individual but related paths the artists of Inside SAM’s Place this year have concentrated their view on the individual and particular object, the small and the handheld, the trees and in this arc from small to large shown us how to look and see the whole of the forest in and through the trees.

Jemima Kemp is a freelance writer based in Adelaide interested in the intersections of craft, art, life and trees.