Maybe they’re called nuclear families, not because they cluster around a stable centre but because they collide and scatter, describe orbits. Because of their push pull of attraction and repulsion. Because at the heart of family is not stability but this never ending cleaving together and flying apart. Energy that disassembles but is never destroyed. 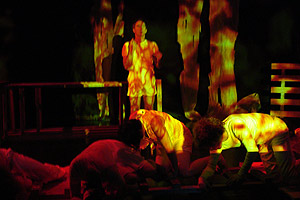 Growing from three shorter works around family- the convolutions of sisters, the intensity of fathers and sons and families and their histories-

Katrina Lazaroff’s Pomona Road asks what happens when these fluid configurations collide with the blank wall of trauma.
Lazaroff has cast her dancers as an archetypal family, Mum, Dad, the two sisters and a brother. An ‘every family’ that allows audiences to examine the questions that come with each disaster, what would I do? How could we, would we survive?

Trauma here comes as the destruction of the family home by bushfire and the elision of history and identity. With its destruction the family is cut loose, forced to reimagine themselves and it’s this territory that Pomona Road charts. The dynamic energy of family and eruptive trauma combine as a double helix propelling Pomona Road in this play between dissolution and stability.

The pivotal event of the bushfire is one from Lazaroff’s’ own history, her family losing a home to fire in 1980 and living through the 1983 Ash Wednesday bushfires and this intimacy and assuredness with the material pervades the work. The spoken recollections from family and friends of their bushfire experiences provide an overarching narrative structure driving and framing the action as well as providing a historical specificity .

Pomona Road’s strength lies in the quality and integration of all its elements. Choreography that keeps the dancers in almost constant motion capturing a sense of particles moving, the immersive and evocative projections of Nic Mollison, the fine set design of Kerry Reid and Richard Seidel, Sascha Budimski’s driving and atmospheric score and the dramaturgy of Catherine Fitzgerald contributing to the works tight storytelling.

Time and place are called forth through projections – TV shows, the bush, later flames, sparks and in drifting leaves and wallpapers and the bush over monumental cut out tree shapes ranged around the set. Local radio plays, there’s the susurration of trees and the narrators recollect the beauty and danger of the Hills.

Lazaroff deploys her dancers in dissolving and reforming constellations marking out relationships and alliances. Dad and Mum economically describe a duologue of power, the girls pull each other into and out of orbits, father and son raise fences, tumble and grasp. Flying off, regrouping, they graze past each other tracing out all the lineaments of family.

Like classical tragedy, momentum runs towards and away from the inexorable fact of the fire. Jagged synthesiser and sonorous drones prefigure the fire’s arrival-‘it’s gonna get us this time’. Drowning in flames the family frantically cross and recross each others trajectories, a dense interwoven panic climaxing with the father screaming silently, consumed by flames the family at his feet.

As too Antigone discovers in Anouilh’s tragedy, it’s not the event that matters but the aftermath where the tragedy unfolds. Against luminous burnt trees and floating home plans that mark out their bodies as rooms – ‘bedroom’ ‘bath’ ‘living’- trauma recurs as sparks and flames overlay, leak though into their new fragile ‘normal’.

A daughter shakes out a joyless little shimmy as they don cast off clothes –‘thank the nice lady’. Fat electronica builds anxiety as and dreams of a new home dissolve into fire with the family becoming a mesh of hard diagonals on the floor, arms and legs thrown up in the air, verbal ejaculations like involuntary physical tics ‘ I have to do everything’ ‘It’s not my turn’ ‘he started it’.

Balanced against incipient chaos is a neat invocation of the family car, the only fixed point in all this loose energy. Dad drives, Mum as passenger, kids in the back. Pre fire they bicker to sweet guitar pop, lean into the curves together, working as a unit. In the cold aftermath, eyes shut, isolated, they lean forward, lean back, stop cold in shock.

Moving through this post fire world, in the way we get hipped on songs that speak to certain moments in our lives is Gerry Rafferty’s Baker Street.

It’s nostalgia doubly captured in time it becomes an obsessive refrain of loss and longing.

Eternally circling around their vanished home, looping through the event, the family endlessly create and draw themselves to their own centre; ‘you’re going home’. 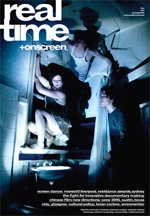