At medieval feasts there was a particular class of dish called subtleties. Tricksy dishes, they were made for effect, (marzipan castles, birds in a pie) they were all about illusion and its dissolution. Collaborations between maker and audience they depended on the audience’s willingness to risk entering into the unknown and the illusionists creative skill. In return for their belief they were rewarded with the surprise and delight of the illusion and its revelation. 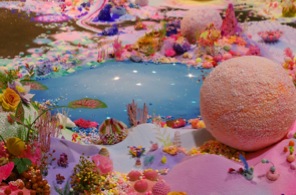 Balancing risk with delight, belief and revelation, this tacit contract lies too within collaborative partnerships. As collaborators are twinned and doubled so risk and delight are intimately allied with each other. No light thing, delight is shadowed by loss and for the delight of what is given and created, collaborators continually risk this.

It’s not such a long way then from marzipan castles to Pip and Pop’s fantastical sugar landscapes, Farrell and Parkin’s gleeful animation or the joy of two poets talking on a bright cold day, for delight runs deep through Duetto’s rich offerings.

Twinned exhibitions with film and performance elements, the AEAF’s exploration of the nature of collaborative partnerships, Duetto ranges over a broad variety of collaborative forms and expressions. What emerges most strongly from this multiplicity is a sense of sustenance. Of sustaining and being sustained by these ineffable and often alchemical relationships. While these may, as director Domenico de Clario writes ‘resist any kind of articulation’ their scaffolds are there to be sensed in the rhythms, synergies and patterns of the work.

Delight is immediate with Pip and Pop’s 3 minutes happiness (2010) their grand hugely detailed landscape composed wholly of coloured sugar, origami follies and giant craggy mountains. Its wealth of things (birds, lights, horses, rainbows) technicolour palette, scale and idiosyncratic sensibility fascinate. Yet its not simply whimsy with the landscape forms and arrangements owing as much to Japanese gardens, with their raked patterns and symbolism as much as to the sensibilities of kawai culture. In the same way that Japanese landscapes draw the viewer into contemplation, 3 minutes… absolute superabundance provokes wonder drawing the eye in and through revealing something gentler and deeper.

Here collaboration emerges as an ethics. Greg Burgess and Pip Stokes write of their relationship, ‘as a form of healing care of the self and other’ and their term ‘the architecture of kindness’ seems an apt and expressive one for the structures of nurturing partnership and for the persistence of care that abounds in these works. D&K’s performance The stranger and his friend (2010) involved the two men almost naked, hooded in black, slowly swinging and singing hymns under naked single light bulbs. Haunting, it was also a work of great and unexpected tenderness.

Janine Antoni and Paul Ramirez Jonas’ two screen video work Migration (1999) shows one endlessly stepping into the only just made footsteps of the other. Quoting Octavio Paz on the experience of love, ‘we are the theatre of the embrace of opposites and their dissolution’, the continuous production of the self, other and the collaborative third is embodied in this endless loop of making and dissolving footsteps .

This experience of being joined and yet individual is articulated as forms in space in Burgess and Stokes’ Sense (2009). A construction of hollow beeswax blocks, their six sided form referencing the cell and collective life of the beehive are arranged in an open curve, like a half built tower. Neither open nor closed, the curve creates a sheltering space defined by the tension between openness and enclosure. Not simply a work between two people, photographed in its original bush land setting, Sense extends collaboration into a healing relationship with nature.

The doubleness of the self and the other moves through the spoken word poems of Aleks Danko and Jude Walton. Taking their audience on a ambling processional through the Botanic Gardens they performed their series, A list of positive things for when things may not be so positive (2010). An index of first lines borrowed from other poets; ‘musing on roses and revolutions’, ‘beauty and beauty’s son’, ‘and the winter’s cold bright tulips we do know’ grew into a singing duologue of lines bouncing back and forth between the poets, a gentle rhythm of the accommodations of each to the others thought. Enveloped in jellyfish like raincoats in the Victorian Palm House, they gave us a couplet of longing (’I mist you’ ‘I mist you too’) as they lovingly misted water into each others faces. The rhythm of this nourishing partnership flows through it all as play and humour.

Different sorts of collaborations take place in Stelarc and Nina Sellars and Farrell and Parkin’s works as they expand and mutate the possibilities of collaboration. Stelarc’s ear on arm (2010), seen as a giant sculpture and surgical photographs is to be Internet enabled with microphone and transmitter allowing remote transmission and input. Becoming many to one, ear on arm both diffuses the idea of collaboration as necessarily intimate and complicates it as the ear becomes the implanted collaborator.

As stelarc morphs self into many, Farrell and Parkin merge in their kooky manga video Physiology of spite (2009/10). Stretching the possibilities of portraiture, Farrell and Parkin have mutated their images into cartoon beings. Seen first as themselves they morph into winged creatures that spread flaming and highly coloured destruction. Against this unreal apocalypse comes the third creature made of their merged photographic selves, a golden ambiguous angel. This oddball take on the collective self embodies their practice, their joyful willingness to enter into the collaborative moment, recognition of its generative possibilities and of the surprise and delight therein.

Missing my own domestic collaboration, I couldn’t attend the world cup tribute soccer match or Domenico de Clario and Stephen Whittington’s tribute to the eclipsed moon, universe as mirror (2010) but in a way the descriptions were enough. Delighting me in the telling, they hooked into my brain becoming something other than what actually did happen. Ideas that connect and grow, every time a tiny collaboration. 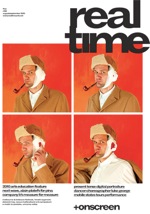